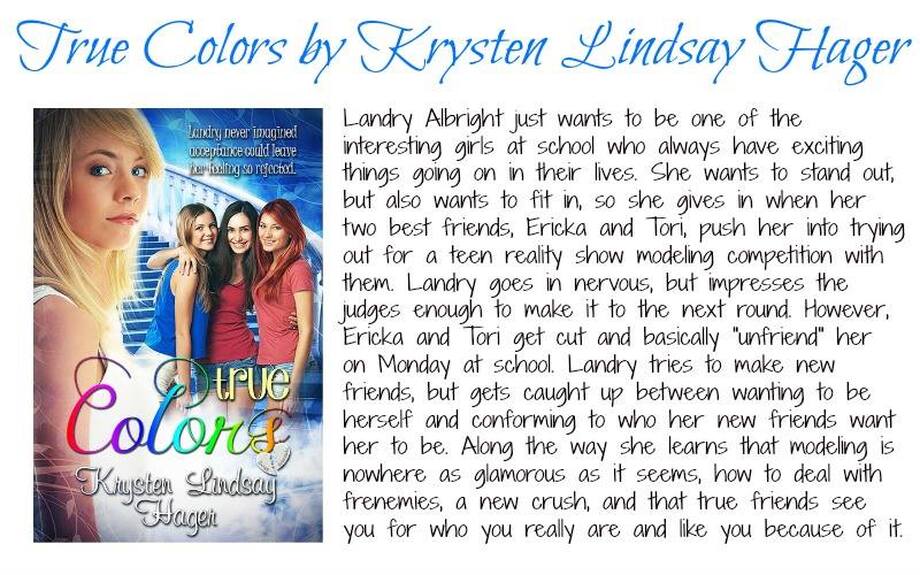 Check out my Pinterest board of inspiration for the characters and the storyline in TRUE COLORS
Follow Krysten Lindsay Hager's board True Colors Inspiration on Pinterest.
-True Colors Playlist-
These  songs could serve as the soundtrack for the book—or for Landry’s life! It’s a mix of new songs, older ones, ones that spoke to me when I needed them most, and ones I feel will speak to you.

Shake It Off—Taylor Swift
I feel like this song could be an anthem for Landry as she gets ready to do her American Ingénue competition stuff while worried about what people at school will say about her.

Popular Song—MIKA  ft. Ariana Grande
This song shows how Landry feels about Arianna and Yasmin and fitting in at school.

Over it—Katharine McPhee
The first time I heard this song was during a reality show where two friends were having a falling out. I think this song sums up Landry thinking about Ericka and Tori and having enough of fake friends.

Friends—Jody Watley Feat. Eric B. & Rakim
The lyrics say it all. The ultimate “frenemies” song. I blast this one when I’m hurt over something a friend has done.

Beautiful—Christina Aguilera
Great song about accepting yourself as you are and seeing the beauty within.

Brave—Sara Bareilles
The ultimate self-confidence song when you’re feeling not so sure of yourself.

Skyscraper— Demi Lovato
This song represents the tough days Landry has when she feels letdown by who she thought were her best friends, Tori and Ericka

Be With You—The Bangles
The ultimate crush song. The Bangles were a huge influence for me as a tween and I can picture Landry humming this while doing her homework and thinking about her crush, Vladi. It’s the perfect crush song.

Whole Wide World—A'me Lorain
This song so captures what it feels like when you have that first big crush. It’s so poppy and fun. I imagine Landry singing this in her bedroom (into her hairbrush!) after seeing Vladi at the basketball game.