Praise for the Series

"Hager’s main character is representative of every teenage girl. The author really nailed the reality of a young girl’s early high school years. I think this is a valuable read for girls ages 12-18." ~ Readers’ Favorite

"Hager wrote from a teen’s perspective, and it gave the book a very authentic feel. She has a real gift for that, something many YA writers lack these days. She reminds me a lot of a modern Ann M. Martin or Judy Blume." ~ Kelly Smith Reviews
​
"If you, like me, have a soft spot for young adult novels then author Krysten Lindsay Hager should have a place on your bookshelf. Ms. Hager brings the teen years to life with absolute perfection in Next Door to a Star. Handling multiple plotlines with an expert touch, she’s crafted a young adult dramedy that on the top layer is a story about Hadley Daniels, an average teen whose only ambition is to fit in, have a few friends, and find her place in the world." ~ Author Erin Fanning

Grand Haven Tribune on Next Door to a Star: www.grandhaventribune.com/Literature/2015/12/07/New-young-adult-novel-set-in-GH

Grand Haven Tribune feature on Competing with the Star: www.grandhaventribune.com/Literature/2016/07/01/Competing-with-the-Star.html?ci=stream&lp=9&p=

NEXT DOOR TO A STAR by Krysten Lindsay Hager
Genre: Young Adult Romance

After Hadley’s best friend moves away and she gets on the bad side of some girls at school, she goes to spend the summer with her grandparents in the Lake Michigan resort town of Grand Haven. Her next door neighbor is none other than teen TV star Simone Hendrickson, who is everything Hadley longs to be—pretty, popular, and famous—and she’s thrilled when Simone treats her like a friend.

Being popular is a lot harder than it looks.

It’s fun and flattering when Simone includes her in her circle, though Hadley is puzzled about why her new friend refuses to discuss her former Hollywood life. Caught up with Simone, Hadley finds herself ignoring her quiet, steadfast friend, Charlotte.

To make things even more complicated, along comes Nick Jenkins…

He’s sweet, good-looking, and Hadley can be herself around him without all the fake drama. However, the mean girls have other ideas and they fill Nick’s head with lies about Hadley, sending him running back to his ex-girlfriend and leaving Hadley heartbroken. So when her parents decide to relocate to Grand Haven, Hadley hopes things will change when school starts…only to be disappointed once again.

Cliques. Back-stabbing. Love gone bad.  Is this really what it’s like to live… Next Door To A Star?
​
★ ★ EXCERPT ★ ★
​
The school year should end right after spring break, because all anyone can focus on is summer vacation. You can’t learn anything new, because all you can think about is all the fun stuff you’re going to do once you don’t have to get up at the butt crack of dawn. Summer always seems full of possibilities.

Nothing exciting ever happens during the school year, but maybe, during summer vacation, you could run into a hot celebrity and he’d decide to put you in his next music video. Okay, it wasn’t like I knew anybody that happened to, but my grandparents did live next door to a former TV star, Simone Hendrickson, and Simone was discovered in an ice cream parlor one summer. Of course, she lived in L.A. at the time and was already doing plays and commercials, so the guy who discovered her had already seen her perform. But hey, it was summer, she got discovered, and that was all that mattered.

Amazing stuff didn’t happen to me. You know what happened to me last summer? I stepped on a bee and had to go to the emergency room. They’re not going to make an E! True Hollywood Story out of my life. I didn’t go on exotic vacations—like today, I was being dragged along with my parents to my cousin’s graduation party. Most people waited until at least the end of May before having a grad party, but Charisma was having hers early because she was leaving on a trip to Spain. I was dreading this party because I didn’t want to listen to everybody talk about how smart and talented Charisma was—making me feel like a blob in comparison—but my mom RSVP’d even though I said I’d rather die than go. My death threats meant nothing. But still, for some strange reason, I had a feeling this summer was going to be different.
​
Praise for the Star Series:

“Hadley our teenage heroine has many of the insecurities, which inflict most of us at this young age…A lovely story, with some good lessons about friendship, self-esteem and relationships, perfectly pitched for teen/young adult readers.” From author Jane Hunt.
​
“Superb Novel for Today's Teenager: This book offers a subtle and seamless progression through changes in the life of a high school girl who struggles with fitting in a crowd of others having unreasonable ideas about friendship…Readers are able to see more sides of a situation or personality, assess situations and people with a fair and objective approach to engage in strong and lasting friendships, but more importantly, to accept others, their inabilities and differences, for a more tolerant and joined society. In other words, teenagers will love reading this novel and be better for having read it.” Review by Lisa's Kids' Book Reviews

“…Hadley realizes is that even celebrities have their own insecurities, make bad decisions and underneath all that make up and the clothes they are just teenage girls hiding their own problems. Verdict: Next Door to a Star is a beautifully written story with genuine characters and a YA heroine who is much stronger than she thinks she really is!” Review from Anastasia Gkaitatzi, Book reviewer for Living in a Bookworld (Greece) 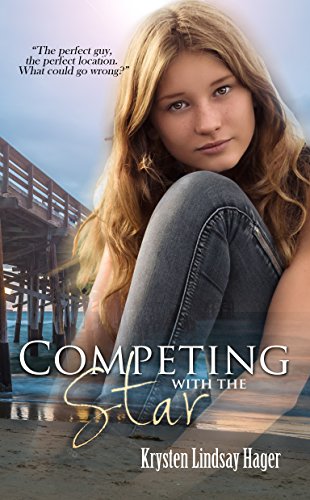 Competing with the Star (Star Series: Book 2) The perfect guy, the perfect location. What could go wrong?

Before the beginning of sophomore year of high school, Hadley and her family move to a beautiful beach town, where she makes amazing new friends and lands the boyfriend of her dreams—Nick Jenkins. He’s the kind of guy every girl swoons over, and it isn’t long until Hadley discovers some are still swooning.

After some time dating, Hadley and Nick form a deep bond. But insecurity sets in when Hadley discovers her boyfriend once had a huge crush on her friend—who just happens to be the beautiful former teen TV star, Simone Hendrickson.

The past is the past—or so they say…

Hadley confronts Nick, who confesses about his history with Simone. Though he claims to only have eyes for Hadley now, it’s hard to believe—especially when she’s blindsided with the news that Nick and Simone kissed after school.

Now Hadley must determine who is telling the truth. Love, betrayal, friendship…who needs soap opera drama when you’re busy competing with a star?
Follow Krysten Lindsay Hager's board Next Door to a Star on Pinterest.

I have loved every word Krysten Lindsay Hager has written. Not only is she a brilliant author, but also and lovely and exceptional person. I knew, as I started this book, that I was going to love it because I have been completely hooked on her books since True Colours. I wasn’t prepared for just how much this book was going to catch me. Hook, line and sinker.
​
Firstly, Hager has a way of written the most brilliantly told YA reads, that ar so very real. They are filled with dilemmas and problems that every teen experiences. She gives them life and the details really take you to that place, where you can wholly connect with what is happening, on a personal level, whether that be from your experiences in the past or if you are going through it now. It is this realness and the ability to give you advice, encouragement and understanding throughout that makes her books so lovely. This book is no exception.

I am speechless by just how well she has done with this newest read. The story is real and relatable, in true Hager fashion, but it also throws in quirky twists and turns that are a mixture of funny, sad or nerve-wracking. These are all too real themselves, but also give the story a great added bonus, as a lot of the situations you won’t have lives a similar experience. I think this gives the characters their own life and feel, but still makes them completely down to earth. Now, Hager has always done this, but with this book she has done it bette than any YA reading I have read to date.
The pace of the story is perfect. It really flows in a way that feels right. There are faster moments of action, slower moments to get to know the people and surroundings and emotional moments that ar a blend of the two. I enjoyed this because life is very much the same. It isn’t flat or slow, but a crazy mix of both.

I loved the characters. As always, Krysten has given us detailed characters with their own personalities, whether boisterous people persons or reserved, quiet introverts, they all have their own characteristics and personalities, right down to how they react to things, what they say and even facial expressions.

Overall, this is a brilliant book, for all ages. It is real, fun and highly addicting…you may find yourself up into the wee hours of the morning moe than once…but it is soo worth it!